What circumstances result in a self-made individual?  In effect, a life journey that is markedly different than one’s parents and even one’s siblings, like inertia did not apply.  Is it the mashing together of the right innate capabilities wonderfully matched to a generation’s challenges and opportunities?  Or is it piss and vinegar driven by tough life lessons that make many fall but others strengthen?

The fascinating life of Barzillai Ansley Scott is one such self-made individual.  But it was hardly obvious what he would accomplish given his start.

BA Scott was born in 1869, Lee and Charlotte Scott’s second youngest of nine children.   Just like all his brothers and sisters BA Scott grew up on a farm in Wisconsin until his parents and some of his older siblings homesteaded in the Dakota Territories as they opened up to another wave of white settlers in the early 1880s.   When BA was almost 10 his father lost a court case for not fully paying back a debt.  Something about hay and a horse did not cover the original debt sufficiently.   When his family took the gamble to

resettle in Dakota it happened to be the same year horrific cold and snow hit the Great Plains as depicted in The Long Winter by Laura Ingalls Wilder.  BA lived a lean childhood like his siblings but somehow took a markedly different path.

In fact, BA’s siblings did exactly what most people did in the late 1800s.  They farmed, they took jobs as railroad conductors or engineers (significant job opportunities given all the new railroad lines connecting every part of America), or they became ministers or minister’s wives reflecting the deep formal religious norm of the times.  Good occupations and good lives.

So how was BA Scott’s path different?   He first shows up in Duluth, Minnesota about 19 years old.  You can almost see him maneuvering as he is caught in city directories, censuses and newspapers going from real estate agent, to collector, to insurance.  His foray into insurance begins with a few stumbles as the state of Minnesota and then Wisconsin require more collateral for this new industry and he is forced to close and then reopen with new insurance offerings and companies.

By the time BA is twenty-six he is a vice president at the Detroit Sanitarium working for leading Detroit businessmen Collins B Hubbard and Henry A Haigh.   Together they join

Continental Assurance of North America with the Detroit Sanitarium and sell healthcare into the railroad unions in a major way.    The deals keep happening.  Continental Assurance consolidates with other insurance companies becoming CNA Financial with BA Scott as its first General Manager while working for Hubbard as President (for reference, CNA Financial is a $65B+ company today).

As BA Scott leaves the insurance industry he is 31/32 years old and becomes a manager, stockholder and trustee at Standard Tie Company.  In this capacity he negotiates first a $67K Munising Michigan land deal, then a $1.2M Arkansas land deal ($350M in today’s dollars)

to provide lumber for the manufacture of railroad ties.   A local Arkansas newspaper claims BA Scott is a “millionaire coming to town”.

Nonetheless, BA’s prowess seems to be operations, like today’s COO.  He makes the supply chain work from purchasing the land, placing saw mills at key points, running the trains that haul the cut lumber to cities, ensuring customer orders are filled day in and out.  He is deep into the financials, the balance sheet, capital requirements, borrowing, implications of worker compensation, the price paid for railroad ties by customers along with cost to acquire lumber and process it.   As a regional officer of National Tie Association he forecasts the market supply and demand.  His knowledge is quoted and respected by his peers across the industry. 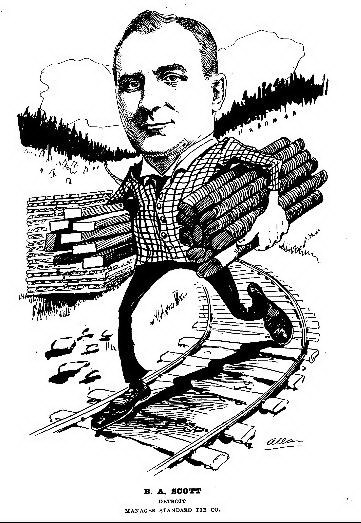 By his mid-late 30s BA becomes vice-president of Standard Tie Company as it consolidates with Grayling Lumber.    He continues traveling regularly to Chicago, the commuter of his day staying at the Great Northern Hotel a week or two most months.   He becomes trustee in Dennis & Sullivan Lumber Company’s bankruptcy.  For Standard Tie Company he also becomes president of their railroad subsidiary transporting lumber and ties.  He is written up in the Detroit Free Press as one of the influential businessmen of his time. 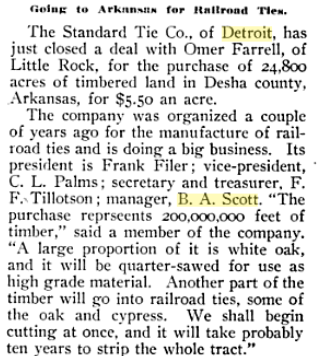 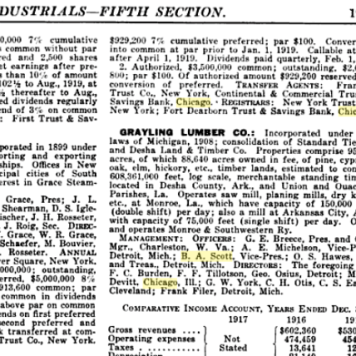 Then in 1913 BA Scott incorporates Scott Tie Company and begins buying large tracts of land and selling railroad ties thru his own company.   Also at this time BA works with a larger group of Detroit businessmen to establish Commonwealth Savings which BA Scott is a director and stockholder in.  BA Scott is now a charter member and officer of the National Tie Association.   He is regularly written up in the Detroit Free Press both for business and his social activities at Detroit Athletic Club.

By 1924 BA Scott is a co-owner and co-builder of an eight-story hotel with a relatively recent Russian Jewish immigrant, Benjamin Braver, who has many construction projects in-process across Detroit.

The Strathmore Hotel is a huge undertaking as it covers a full square block in downtown Detroit.  It is marketed as a luxury residence and hotel with stores conveniently located on the first level.   Nonetheless, during the late 1920s the project seems to be in suffering and BA Scott discovers his co-owner, co-builder is diverting building funds to cover other projects that are going south.  Not good. 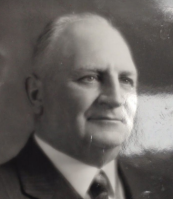 Some serious misfortunes start pilling up.  BA Scott’s wife dies from breast cancer.  The Depression hits BA Scott hard.  BA’s only son Collins suddenly dies from amoebic dysentery.  The  Strathmore Hotel results in a lawsuit between BA Scott and the Union Bank.  BA Scott loses this suit in the Michigan Supreme Court.  And then in 1937 BA Scott dies in a Nashville Tennessee hotel room.

Whatever the end, BA Scott’s story is still one of a different road taken, certainly given his parents and siblings and upbringing.  Why was his path different?   How did he even figure it out?  Would he have achieved more or less if knowledge had been just handed to him?  What drove him?

All questions that one can only surmise answers to.  Nonetheless, a perspective never hurts??  For what it is worth, here is mine.

BA had the needed fundamental characteristics.  Smarts, lot of them.  Discipline and disciplined thinking.  Willingness to take risks based on his own judgment. Intense work ethic, relentless, tenacious, willing to sacrifice personal and family time.   Not tripped up by things not going as planned, instead worked the problem.  Exudes knowledge, gains other’s respect and trust, listens well and incorporates other’s perspectives.

However, talent and gained knowledge does not answer why BA Scott versus his siblings that seemed to have equivalent potential capabilities and opportunities.  What creates the “bee in one’s bonnet” that drives one to have such a differentiated path?   I doubt a remarkably happy or idyllic childhood is such a motivator.  But utter poverty or a damaging family situation may not be a driver either, at least in BA’s case.

Possibly a recipe for a differentiated path is:  the right inherited and learned characteristics secret sauce, nothing damages one beyond a absorbable level or makes it too easy, and one lives in a place and time where inherent strengths are highly leverage-able, useful.   But added to this recipe is a touch of our unique individual self and specific individual experiences that propel us to be passionate about something at a level that step-changes the outcome.    Possibly our self-realization, personal identity fuel our drive, which is applied liberally to our passionate focus.   Our continued experiences and gained knowledge reinforce our differentiated path, sense of self and drive.  And we live a life that is cumulatively a different path, a path highly shaped by our unique selves, not like our siblings or parents, just us.   Like BA Scott, a self-made businessman. 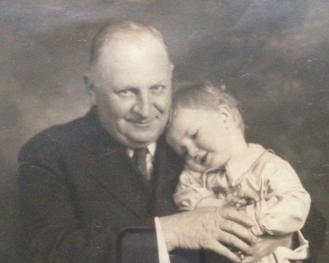 BA Scott with Dean Palmer Scott at about 2 years old 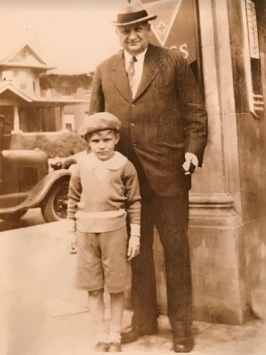